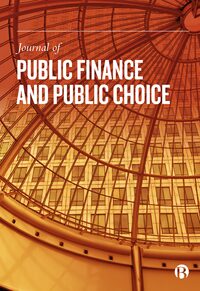 James M. Buchanan and the Journal of Public Finance and Public Choice: extending the Italian tradition of public finance

The Journal of Public Finance and Public Choice began publication in 1983 under the title Economia delle scelte pubbliche/Journal of Public Finance and Public Choice, changing to Journal of Public Finance and Public Choice/Economia delle scelte pubbliche in 1997. Under either name, the Journal reflected the founding editor’s (Domenico da Empoli) desire to amplify and extend the Italian orientation toward public finance that Antonio de Viti de Marco (1888) set in motion. It’s fitting that James Buchanan’s (1983) ‘The public choice perspective’ opened the Journal, for Buchanan (1960) was instrumental in promoting awareness among Anglo-Saxon scholars of the Italian tradition that da Empoli sought to carry forward in establishing the JPFPC. With da Empoli’s death in December 2016, the Journal is now proceeding with a new editorial team (Emma Galli and Giampaolo Garzarelli) and a new publisher (Bristol University Press). The Journal’s orientation, however, remains unchanged, in that it continues to welcome contributions within public finance and public choice within the broad tradition outlined here. In this essay, I mark this change in editorial regime by reviewing how Buchanan’s orientation toward public finance continues and extends the tradition that de Viti (1888) began.