Our growing Sociology list has a global outlook featuring high-quality research across emerging and established areas in the field, such as digital sociology, migration, gender, race and ethnicity, public sociology, and children and families.

Our series include the bestselling 21st Century Standpoints, in collaboration with the British Sociological Association, and the Sociology of Diversity and Public Sociology series.

We publish leading journals in the field, including Emotions and Society in association with the European Sociological Association's (ESA) Research Network on Sociology of Emotions (RN11) as well as Families, Relationships and Societies and the Journal of Gender-Based Violence.

Page:1234567891011 ...
What about a sister wife? Reasons for considering polygyny among Salafis in Switzerland
Author: Mira Menzfeld

The article describes why some male and female Swiss Salafi converts support polygynous marriages. Against this background, it provides insights into how specific cultural models of partnerships that differ drastically from the majority society’s expectations can be managed. Swiss Salafis live in a society and legislative system that restrict polygynous civil marriage, especially religiously grounded polygyny. Drawing on Shore’s concept of cultural models, I will show how Salafi converts navigate partially contradictory relationship models by reconstructing their thoughts and feelings during the selection process of possible second wives or of already married men. Three case studies are presented, stemming from participant observations in 2019 in Switzerland.

This worldwide crisis initiated frantic comparison (and competition) between nations to search for a response to the coronavirus. Sweden has been more than ever in the spotlight, under media and popular scrutiny. The daily briefings of Anders Tegnell and his sidekicks were followed by journalists and experts around the world. Initially there were more favourable opinions about a strategy that avoided lockdown and mitigated the effects on the economy, but it became increasingly controversial as the mortality rate rose. This chapter reflects on the comparison of policies, statistics, infection rates, death counts and the moral and normative dimensions that surrounded the justification of each nation’s ‘strategy’, along with forms of ‘health care nationalism’ that emerged in many countries, and markedly in Sweden. Indeed, the high and stable legitimacy of the Public Health Agency, []FHM, and its main experts has been striking and in sharp contrast with the situation in other European countries w[h]ere experts and politicians alike have faced sharp criticism. I show that this is coherent with traditional forms of trust in science, expertise and public institutions in this society but that it also hides a tendency to avoid divisions and conflicts 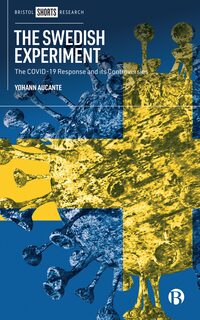 This chapter reviews the initial phases of the Swedish response to the epidemic emergency. The ‘slow’ and ‘delayed’ response Sweden was criticized for is accounted for in all its complexity. It is important to try to explain why Sweden deviated so much from the rest of Europe, in comparison with its direct neighbours, but also by contrast to its own history of handling epidemic crises. This response met with a lot of astonishment, especially in light of the fact that Sweden has one of the lowest hospital bed capacity in the OECD and could have been expected to react very differently. While the role of FHM, the Public Health Agency, and of its chief epidemiologist, Anders Tegnell, corresponded to a traditional form of administrative independence and heeding of expertise, it went much further than what is generally expected, and other factors must be taken into account to make sense of their unprecedented influence. The lack of certain legal instruments is also important in this regard. The most controversial debate around ‘herd immunity’ and whether Sweden strived to achieve and even more or less openly promoted are some of the issues discussed in this chapter.

There has hardly ever been so much focus on Sweden in such a limited period of time. The Swedish model has for a long time been a source of interest around the world, attracting more positive views from the Centre-Left, and more negative ones from the critics of egalitarian and redistributive policies. With ongoing public sector and welfare reforms since the 1990s, Sweden has gained unexpected new supporters from the economically liberal Right. This crisis seems to have turned the classical lines of support upside down, with a new coalition of libertarians and populist right-wingers now much more prone to praise the Swedish defence of civil liberties and of business interests, the responsibility of citizens in respecting health recommendations, whereas traditional supporters have been more critical of the failure of an advanced welfare state to protect its vulnerable elderly population and to reduce the mortality rate on a par with its Nordic neighbours. The crisis and resulting commissions of inquiry also modified the parameters of stated intervention while reframing the debate on welfare and elderly care reforms and on the structure of crisis management.

The slower resurgence of contaminations in the autumn of 2020 seemed to give credit to the Swedish approach and showed a temporary return to grace in international media. While the experts still enjoyed a high level of trust, some cracks started to appear with inquiries into the failure to protect vulnerable elderly populations. The idea that democracy and political responsibility had been undermined by excessive trust in expertise and bureaucracy became more widely discussed. Some unusual criticism was even voiced in Norway and Denmark and, with the return of the virus, there were indications of a strategy shift with stricter measures and new pandemic legislation by the end of 2020. Nevertheless, it all took place in the same pragmatic and calm fashion that had characterized the management of the epidemic so far. Although still criticized for its higher mortality compared to its neighbours, Sweden carried on with a vaccine roll out in 2021, escaping most controversies in this respect until the implementation of a vaccine pass. The crisis is not over and further consequences are to be expected from the inquiries into the national strategy and its potential failures.

ONE: The Uses of National Models
Author: Yohann Aucante

This chapter traces some of the intricate origins of the Swedish and Nordic Models discourse and representations, explain the various dimensions that they came to incorporate, from social democracy and universal welfare to strong egalitarian norms, transparency and accountability. It reflects on some of the more recent changes and uses of this notion in light of policies of social welfare and economic reforms that have taken place over the last three decades. However, the successful ‘packaging’ of these values in international branding strategies goes along with a ‘good Sweden/bad Sweden’ historical duality that is increasingly used in social media. Social scientists have stressed the problematic flexibility of the uses of the Swedish model that became evident in light of the recent debates on a specific Swedish strategy in the COVID-19 crisis.