The (re)politicisation of gender in Western Europe

The issue of gender equality is not new to democratic competition in Western Europe. Following the protests and political transformations of the late 1960s and early 1970s, questions of equal representation and the participation of women, as well as issues of self-determination and reproductive rights, became part of the political agenda. Compared to the political status quo of the 1950s and 1960s, the following decades saw relatively progressive change in many of these policy areas.

Looking at the political developments of the few last years, however, we can observe a backlash against several aspects of gender and sexual equality, and an outright attack on institutions, programmes and feminist activists. The public discourses often focuses on developments in Poland and Hungary, where attacks on lesbian, gay, bisexual and trans (LGBT) rights or gender studies programmes have accompanied an authoritarian turn by the radical right governments led by the Law and Justice Party (PiS) and Fidesz (Grzebalska and Pető, 2018).

In this ‘gender update’, we use data from political parties’ social media posts to argue that a novel politicisation of ‘gender’ has also taken place in Western Europe and focus on how this has been driven by parties of the mainstream right and radical right. As a growing literature has documented, parties of the political right have (re)discovered ‘gender’ as a tool for conservative mobilisation – especially focusing on questions of gender and sexual identity. From a vote-seeking perspective, this novel turn against ‘gender ideology’ or ‘woke/cancel culture’1 can be promising for mainstream and radical right parties. In Western Europe, the general trend of secularisation, in combination with more progressive generational replacement, has made many conservative positions such as opposition to same-sex marriage electorally much less popular. However, large shares of the electorate still regard themselves as losers of modernisation and are generally opposed to what is often seen as a linear trend towards more culturally progressive societies. A new framing around opposition to feminism, ‘gender ideology’ or, for example, trans* and non-binary identities seems to have made it onto the agenda not only of radical right parties, but also of conservative politicians, pundits and media outlets (Kováts, 2017; Dietze and Roth, 2020).

For example, in their coalition agreement in 2017, the Austrian People’s Party (ÖVP) and radical right Freedom Party (FPÖ) emphasised differences between men and women – and thus an explicitly binary approach to gender – for the well-being of societies (Goetz, 2018). The Christian Social Union (CSU), the Bavarian sister party of the German mainstream right party Christian Democratic Union (CDU), denounces ‘gender ideology’ as an instrument of interventionist educational policies. In their party platform (CSU, 2016), they declare: ‘We reject social and educational policies that follow gender ideology and early sexualization.’ Parties of the political right decidedly emphasise that an inclusive perspective on gender is ‘ideological’ and associated with the agenda of the political left. This position is well integrated into a general right-wing framework of anti-interventionist subsidiarity that claims to protect the family from an overly intrusive state. In addition, we can often observe a combination with a populist narrative that portrays demands for gender inclusivity as a project of urban, liberal elites against the will of the ‘common man’.

Can we, however, systematically detect such a novel focus on gender-related issues in the political speech of mainstream right and radical right parties? In order to answer this question, we present data from an ongoing research project that investigates the politicisation of gender-related issues among political parties. In this project, we apply methods of quantitative text analysis to parties’ social media communication. Social media has become a central tool for political parties to communicate their political positions ‘unfiltered’ and directly to potential voters. This communication strategy is particularly popular among radical right and other populist parties. Here, we rely on a comprehensive dictionary of around 80 words often used in public debates on feminism, covering diverse aspects like gender roles, patriarchy and the abortion issue, and apply it to political parties’ Twitter accounts. Based on this dictionary, we then classify Tweets as either containing or not containing words related to feminism.

In Figure 1, which shows the feminism-related content in the tweets of political parties in seven Western European2 countries since 2016, we see a striking development. While parties of the Left generally used to emphasise feminism-related issues more, there is a strong increase in the tweets dedicated to these issues by mainstream right and radical right parties. In the beginning of 2020, mainstream right parties emphasised these questions even more than mainstream left and other progressive parties did. Of course, this increase in salience does not indicate that right-wing parties have now become the spearhead of the feminist movement. On the contrary, mainstream right and radical right parties criticise gender-inclusive policies and, for example, restrictive positions on prostitution are very salient.

Overall, we find that parties of the mainstream right and radical right increasingly politicise ‘gender’. It is thus possible that we will see an increasing political conflict around questions of gender and sexual identity within (Western) European electoral competition. An academic as well as politically relevant question is how this conflict will be integrated into existing cleavages, and if parties of the Left will champion progressive causes on this dimension. Some current debates around what is often referred to as ‘identity politics’ raise doubt about this. Many on the Left argue that a structural perspective on discrimination and a progressive position on gender and sexual identity constitute a wedge issue for the redistributive coalition (for example, Lilla, 2018), though there is little evidence that actually supports this claim (Abou-Chadi et al, 2021). Normatively, of course, political parties that are interested in equality and care for marginalised groups should make progressive and gender-inclusive positions an essential part of their agenda.

This culture is, of course, not limited to gender.

The countries included were Austria, (Dutch-speaking) Belgium, Denmark, Germany, Netherlands, Sweden and (German-speaking) Switzerland. To cover these countries, the dictionary was created in the German language by the authors and translated into Danish, Dutch and Swedish by country experts. 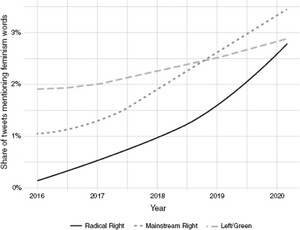