Slowly adopting: the impact of same-sex marriage legalisation on the attitudes of parliamentary candidates in Germany

In recent years, many European countries have legalised same-sex marriage (SSM). Germany is no exception. While ‘registered partnerships’ were introduced in 2001, it took another 16 years until SSM was legalised. This was mainly due to the high levels of coalition discipline that prevented the Christian Democratic Union’s (CDU/CSU) coalition partners from legalising SSM by collaborating with opposition parties. In June 2017, however, the CDU/CSU allowed for a ‘conscience vote’ on SSM, in which party factions do not put any pressure on their legislators to vote cohesively (for a comprehensive analysis of how and why the CDU/CSU became more lesbian, gay, bisexual, trans and queer [LGBTQ] friendly under Angela Merkel, see Schotel, 2022). Crucially, the CDU/CSU was still not particularly favourable towards SSM in 2017; only a minority of 24.7 per cent of their legislators voted for SSM legalisation (see Table 1). Following research analysing the shift in attitudes after SSM legalisation (Bishin et al, 2016), this article investigates how the legalisation of SSM has affected the position of CDU/CSU candidates on SSM.

Note: The Alternative for Germany (AfD) and the Liberal Party (FDP) were not represented in the Bundestag. SPD = Social Democratic Party.

I use data from the German Candidate Survey in 2013, 2017 and 2021 (GLES, 2014; 2018; 2022).1 Each survey includes the following statement: ‘Same-sex marriages should be prohibited by law’. Candidates indicate their agreement with the statement on a five-point scale. I collapse the responses into three categories: ‘Support for SSM’, ‘Neither/nor’ and ‘Opposition to SSM’. I use party membership, left–right self-placement, religiosity, age, gender (binary), mandate type, incumbency and region (East Germany) as independent variables. The main independent variable of interest is party membership, with a focus on candidates from the CDU/CSU. The analyses are run using ordered logistic regression for each election separately.2

Figure 1 displays the results based on predicted probabilities of support for and opposition to the legalisation of SSM. I exclude the middle category from the plot as there is almost no variation in the predicted probabilities for this outcome. The results clearly show that candidates from the CDU/CSU became much more supportive of SSM in 2021. While support among candidates was around 75 per cent in 2013 and 2017, it increased to almost 90 per cent in 2021. Likewise, there is almost no opposition to SSM in 2021 among CDU/CSU candidates. It should be noted that support for SSM is generally much higher in the survey responses compared to voting behaviour in the Bundestag (compare Table 1). There are many potential reasons for this, including the sample of candidates participating in the survey or social desirability bias. It is also possible that CDU/CSU legislators in 2017 were quite favourable towards SSM but did not vote according to their actual preferences in parliament because they assumed that their voters oppose the legalisation of SSM. Future research could analyse this aspect in more detail.

It is also important to note that the attitudes of CDU/CSU candidates only changed in 2021, not already in 2017. When the survey data from 2017 were collected (from October 2017 to February 2018), SSM was already legalised (in June 2017). Thus, the survey responses in 2017 were not driven by party discipline.3 This finding is consistent with research demonstrating opinion shifts in favour of LGBTQ rights after their legalisation (see Ayoub, 2016: ch 5).

I also analysed whether similar position shifts can be observed for the CDU/CSU on other societal issues. The surveys include an item asking if women should have the right to decide for themselves to have an abortion. If the results on SSM are driven by an increasingly more liberal CDU/CSU on societal issues, similar effects should be observed for the abortion question. However, this is not the case (see Figure 2). This suggests that the findings on SSM are not driven by a more general ideological change within the CDU/CSU.

In summary, conservative parties tend to become more favourable towards SSM after its legalisation. However, this change might take some time. Future research could take a comparative perspective and analyse more systematically whether the findings from Germany generalise to other contexts.

Research by Carroll and Kubo (2019) suggests that candidate surveys are suitable to derive party positions from these responses.

I am grateful to Roni Lehrer for highlighting this aspect.

Data for this article cannot be publicly shared because access to the German candidate data has to be granted by GESIS and the German Longitudinal Election Study (GLES). For the code to replicate the findings, see Jankowski (2022).

Michael Jankowski is a post-doctoral researcher at the University of Oldenburg, Germany. His work focuses on parties, candidates, elections and descriptive representation. Previous research has been published in such journals as Political Analysis, Party Politics and Electoral Studies. 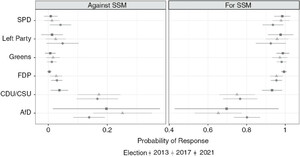 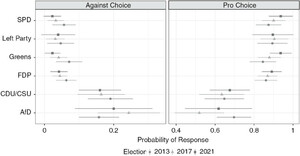